Nottingham is a city in central England’s Midlands region. It’s known for its role in the Robin Hood legend and for the hilltop Nottingham Castle Museum and Art Gallery, rebuilt many times since the medieval era. In the Lace Market area, once the centre of the world’s lace industry, the Galleries of Justice Museum has crime-related exhibits. Wollaton Hall is an ornate Elizabethan mansion with gardens and a deer park.

The city is located in the heart of England, in the East Midlands, and is neighboured by two other large cities; Leicester and Derby. As one of the Core Cities, Nottingham is a leader in the region, and has influence over the two other cities, and the surrounding borough authorities. Nottingham city has a population of 310,800 however its economic influence stretches beyond the city boundaries into neighbouring district Councils. The Greater Nottingham city region has a population estimated to be nearly 795,200 and the workforce around 521,000.

City of Caves is a visitor attraction in Nottingham based on a network of caves, carved out of sandstone that have been variously used over the years as a tannery, public house cellars, and as an air raid shelter. The caves are listed as a scheduled monument by Historic England under the name Caves at Drury Hill, Drury Hill being the medieval street under which they were formerly located until it was demolished to make way for the Broadmarsh Shopping Centre. The newer City of Caves name refers to the fact that the city of Nottingham has hundreds of man-made caves, which have been in use for over a thousand years. The City of Caves was accessed from the upper level of the Broadmarsh Shopping Centre but can currently be accessed from Garner's Hill due to construction works in the Broadmarsh Centre, scheduled to finish in 2021.

Nottingham Castle is located on a natural promontory known as "Castle Rock" cliffs 130 feet high. In the Middle Ages it was a major royal fortress and occasional royal residence. While King Richard I ("the Lionheart") was away on the Third Crusade, along with a great number of English noblemen, Nottingham Castle was occupied by supporters of Prince John, including the Sheriff of Nottingham. In the legends of Robin Hood, Nottingham Castle is the scene of the final showdown between the Sheriff and the heroic outlaw. In March 1194, an historic battle took place at Nottingham Castle, part of the returned King Richard's campaign to put down the rebellion of Prince John. The castle was the site of a decisive attack when King Richard besieged it after constructing some siege machines. The castle surrendered after just a few days.

Shortly before his 18th birthday, King Edward III, with the help of a few trusted companions led by Sir William Montagu, staged a coup d'état at Nottingham Castle (19 October 1330) against his mother Isabella of France, and her lover, Roger Mortimer, 1st Earl of March. William Montagu and his companions were accompanied by William Eland, castellan and overseer of Mortimer's castle, who knew the location of a secret tunnel which would take them higher up in the castle to a normally locked door. In the dark of night on 19 October 1330, Montagu and his companions entered the tunnel, climbed up to the door, which had now been unlocked either by Edward III or a trusted servant, and overpowered Mortimer, killing Mortimer's personal guards. Mortimer was bound and gagged, led out of the tunnel and arrested, along with Queen Mother Isabella. Mortimer was sent to the Tower of London and hanged a month later.

The castle was in decline by the 16th century, it was largely demolished in 1649 during the civil war. The Duke of Newcastle later built a mansion on the site, which was burnt down by rioters in 1831 and left as a ruin. It was later rebuilt to house an art gallery and museum, which remain in use. Little of the original castle survives, but sufficient portions remain to give an impression of the layout of the site. 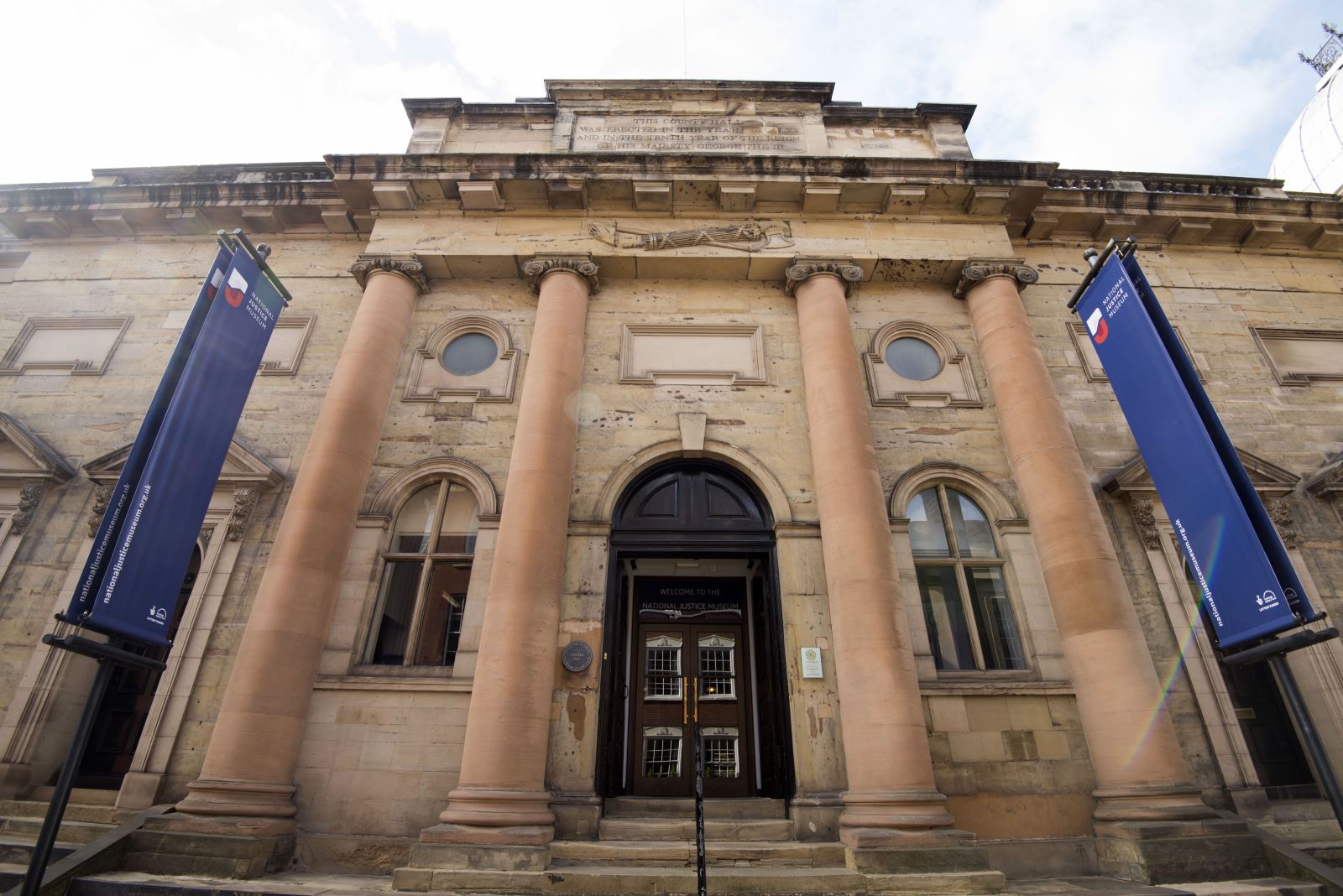 The National Justice Museum is an independent museum on High Pavement in the Lace Market area of Nottingham, England. The museum is housed in what was once a Victorian courtroom, gaol and police station, and is therefore a historic site where an individual could be arrested, sentenced and executed. The courtrooms date back to the 14th century and the gaol to at least 1449. The building is a Grade II* listed building and the museum is a registered charity.

Wollaton Hall is an Elizabethan country house of the 1580s standing on a small but prominent hill in Wollaton Park, Nottingham, England. The house is now Nottingham Natural History Museum, with Nottingham Industrial Museum in the outbuildings. The surrounding parkland has a herd of deer and is regularly used for large-scale outdoor events such as rock concerts, sporting events and festivals. Wollaton Hall was built between 1580 and 1588 for Sir Francis Willoughby and is believed to be designed by the Elizabethan architect, Robert Smythson, who had by then completed Longleat, and was to go on to design Hardwick Hall. The general plan of Wollaton is comparable to these, and was widely adopted for other houses, but the exuberant decoration of Wollaton is distinctive, and it is possible that Willoughby played some part in creating it.

Newstead Abbey, in Nottinghamshire, England, was formerly an Augustinian priory. Converted to a domestic home following the Dissolution of the Monasteries, it is now best known as the ancestral home of Lord Byron. 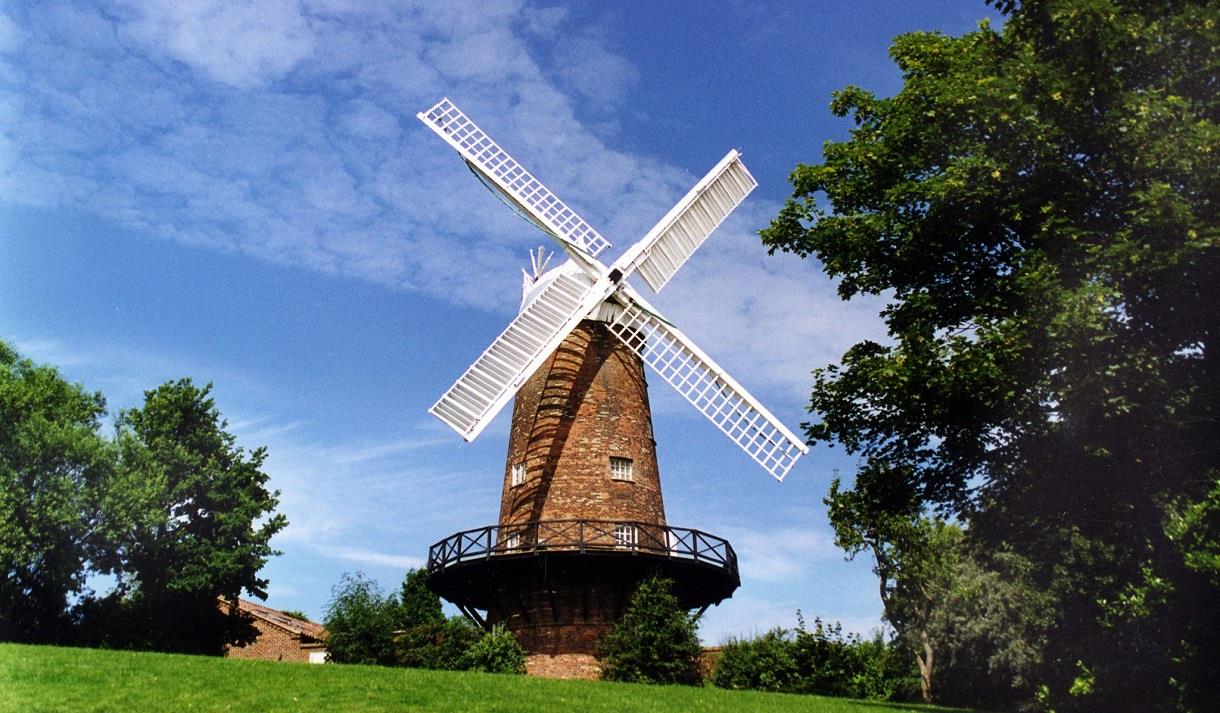 Green’s Windmill is a restored and working 19th century tower windmill in Sneinton, Nottingham. Built in the early 1800s by baker George Green. It is located on the site of a previous post mill and there were at least two other mills on Windmill Lane in Sneinton. In 1829 the elder Green died and his son, the mathematical physicist George Green, inherited the mill. , it remained in use until the 1860s. It was renovated in the 1980s and is now part of a science centre, which together have become a local tourist attraction.

Church of St Mary the Virgin

The Church of St Mary the Virgin is the oldest religious foundation in the City of Nottingham, England, the largest church after the Roman Catholic Cathedral in Nottingham and the largest mediaeval building in the city. The church is Grade I listed by the Department for Culture, Media & Sport as a building of outstanding architectural or historic interest. It is one of only five Grade I listed buildings in the City of Nottingham. It is situated on High Pavement at the heart of the historic Lace Market district and is also known as St Mary's in the Lace Market. It is a member of the Greater Churches Group, and part of the parish of All Saints', St Mary's and St Peter's, Nottingham.

Trent Bridge is a cricket ground mostly used for Test, One-Day International and county cricket located in West Bridgford, Nottinghamshire, England, just across the River Trent from the city of Nottingham. Trent Bridge was first used as a cricket ground in the 1830s. The first recorded cricket match was held on an area behind the Trent Bridge Inn in 1838. Trent Bridge is also the headquarters of Nottinghamshire County Cricket Club. As well as international cricket and Nottinghamshire's home games, the ground has hosted the Finals Day of the Twenty20 Cup twice and will host the final of the One-Day Cup between 2020 and 2024. In 2009, the ground was used for the ICC World Twenty20 and hosted the semi-final between South Africa and Pakistan. The site takes its name from the nearby main bridge over the Trent river.